This site focuses on Homes and Gardens 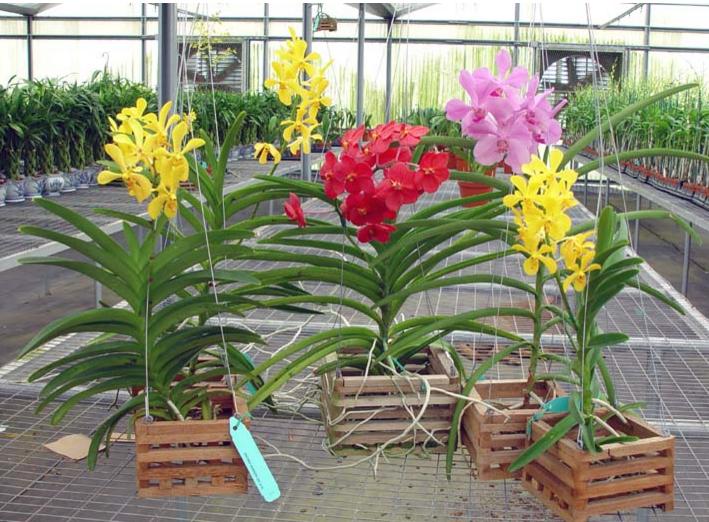 The Vanda Orchid is not very different from the Ascocenda orchid and the Phalaenopsis orchid or the Moth Orchid as it is fondly thought of. All these orchid species are totally tropical. The Vanda orchids are no more difficult to grow than other orchids, but they do have special cultural needs if you want to bring out the best in this orchid species. The Vanda orchids originated from the warm islands of the South Pacific. Places like Malaysia, Thailand, Borneo and the Philippines are home, natural home, to these orchid species. These sympodial epiphytic orchids prefer full sun exposure and thus like bright light, warm temperatures, and lots of humidity. They have long, trailing roots that draw moisture and nutrients from the atmosphere. 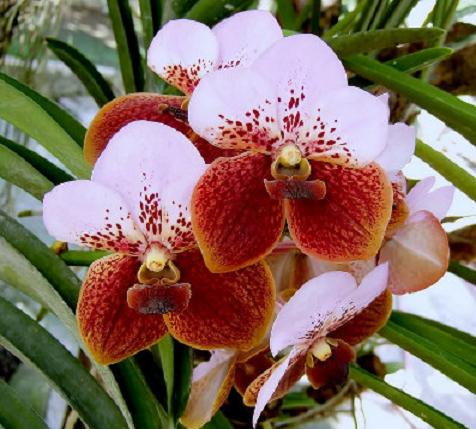 The Vanda orchid, or the Vandaceous orchid to give its proper name, has become so popular since they are an excellent orchid species that lends itself to hybridization with several other orchid species. It has been used in so many successful hybridizations. Any mention of the Vanda orchid is not complete without mentioning the Vanda sanderiana (also known as the Euanthe sanderiana).

This is a truly beautiful orchid that bears bright pink and maroon orchid flowers that have spectacularly long-lasting characteristics. Another spectacular example of the Vanda orchid hybridization is the Vanda Rothschildiana x Vanda Coerulea, which is possibly the bluest of all orchid flowers with heavy contrasts of white. The orchid flowers itself are saucer-sized, flat blooms with an extremely heavy substance and a crystalline texture that glistens in the light.

Cultivation
These days the Vanda orchid is grown widely around the world, in Durban (South Africa), in the Netherlands, and in Florida (USA) despite the fact that they are rather unwilling to flower in climates other than their natural habitat. The fact that there are many successful hybridization of this orchid species accounts for the widespread occurrence of this orchid species. The wide range of colors which includes some fairly good blues and browns has added greatly to their popularity.

The Vanda orchid comes in yellow, orange, scarlet, deep purple and bright fuchsia orchid flowers. There are many size variations and some of these orchid flowers sport exotic markings or can be covered with spots or stripes. Many Vanda orchids have a powerful fragrance. The inflorescences appear from the axis of the leaves. The orchid flowers are long lasting and appear in a cluster along the spike. I just need to add that these orchids have long lasting flowers on the plant and not when used as cut flowers. 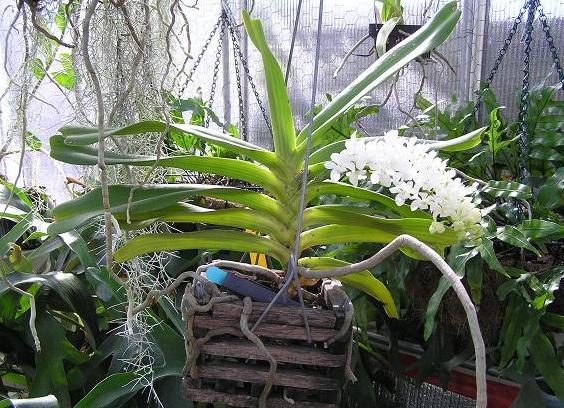 Even if you cultivate your orchid plants indoors, you need to ensure that your Vanda orchids are kept at the optimal temperature where they will thrive. In cooler areas the orchid plant will go into a dormant state during winter. This dormancy is not to the orchid plant’s detriment because it in most cases result in bigger and better flowers. The ideal temperature range for the Vanda orchid is a low of 15° Celsius (59° Fahrenheit) in winter and a summer high of 32° Celsius (98° Fahrenheit). The Vanda orchids are capable of tolerating higher and lower temperatures for short periods only.

Light
All Vanda orchids require light. Too little light will result in lanky and soft orchid plants. If you are cultivating these orchids at home be sure to make use of 20 to 30 percent shade cloth. The Vanda orchid is fast growing and therefore prefer high light levels. A covered roof is even better since you can then protect the Vanda orchid with its blooms from the harsh rain and winds.

You also need to keep in mind that the Vanda orchid also likes to be cooled by a constant breeze. This makes air movement vital to the successful cultivation of Vanda orchids. Stagnant air can result in fungal and bacterial rot.

Feeding
All Vandaceous orchids are heavy feeders. You should provide them with a high nitrogen orchid fertilizer such as 30:10:10 in spring to shake it up after its winter dormancy. During the summer you should follow the feeding schedule with a general fertilizer and a good bloom booster in autumn. There is no need to feed your Vanda orchid during the winter, but if you intend to keep your orchid plants warm during winter then you can continue to feed to orchid plant. In excessively cool weather winter feeding would be wasteful. (Tip: Always water before fertilizing.)

Pests and Diseases
The Vanda orchid is not particularly susceptible to pests or disease. In the event of scale insects being detected, as wiping the surface of the leaves with methylated spirits on a cotton bud and following up with a systemic spray should stop the problem. Always try to steer clear of chemical as it is the least recommended route of treatment for infected Vanda orchids. Only treat bad infestations with chemicals.

Potting mix and Repotting
It is known that the Vanda orchid may grow to be very large plants. They normally grow best suspended in wooden baskets and require warm growing conditions with plenty of bright light. Thus the potting of the Vanda orchid is referred to as Basket Culture. These orchid plants are air-loving plants and they do not require any media in which to be cultivated. A wooden slated basket is ideal. From seedling stage the orchid plant should be secured to the base of the wooden basket with wire so as to prevent them from moving around. 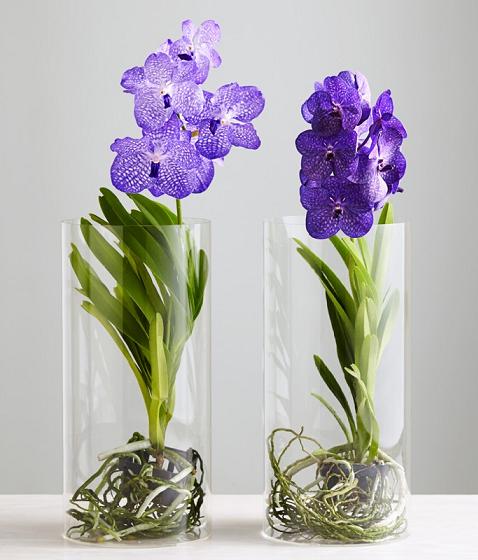 Before you know it the orchid plant will develop into a young plant that will attach itself to the basket and produce several roots. As time passes the Vanda orchids will grow and ‘repotting’ can be when you simply place the smaller basket into a bigger basket until the plants are too big to handle. Then you should consider cutting the orchid plant back and replant them in baskets of a more suitable, manageable size.

One major advantage of basket culture for the Vanda orchid is that they are less prone to pick up fungal and bacterial diseases.

If the Vanda orchid is grown as a houseplant, they appreciate spending the warmer months outside. They like bright light, but the leaves will burn if they go directly from indoor conditions to full sunlight. The Vanda orchid needs less water in the fall and winter but may be watered most mornings in the summer, especially when grown outside under trees.

Vanda orchids are very rewarding. The new hybrids are free blooming and usually flower several times a year. Vanda orchid flowers are long lasting on the plant but do not last well when cut.
Vanda orchids are often grown outdoors in hanging baskets during the summer months. The Vanda orchid is a heavy feeder and should be fed a balanced fertilizer often.

I am a Faculty of the New Era University, Quezon City Philippines, under the Language Department.